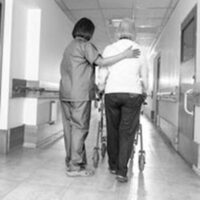 Starting in February and escalating into early March, the nursing home in a Seattle suburb became one of the disease’s first hot spots in the United States. By March 9, more than a week before any state had issued a stay-at-home order, the Kirkland facility already had 129 cases (81 among residents; the rest among staff and visitors) and 23 deaths from the novel coronavirus, according to a Centers for Disease Control and Prevention report.

Before long, it became clear that practices at the Kirkland facility contributed to the spread of the virus there, according to federal inspectors. A Washington Post investigation found that the problems were endemic to the Life Care Center chain of nursing homes: “Dozens of Life Care homes received below-average staffing ratings or were flagged during inspections for not having enough nurses to properly care for patients.”

But for all the problems with the Life Care Center chain, it would soon become clear that its experience would not be unique. While the Kirkland facility may have been the first known US nursing home hit, it would not be the last.

Estimates vary, but analysts Gregg Girvan and Avik Roy found that as of June 29, 50,779 of the 113,135 US deaths from Covid-19 (or 45 percent) were deaths of residents of nursing or long-term care facilities. Their numbers suggest that about 2.5 percent of all nursing home residents have been killed by the disease; in New Jersey, which is particularly hard hit, the share is over 11 percent.

By Kohn Law | Posted on August 18, 2020
« Paying Attention For Signs of Nursing Home Abuse and Neglect During COVID-19
Study: Nursing Home Residents Not Protected From Antipsychotic Drugs Under Trump »